I went to the state fair this past weekend. As I walked around in crowds full of people and long lines to get on rides, I thought to myself “imagine having a stomach of steel”. I say this because my stomach is very uneasy when it comes to certain motions. So sometimes I find myself envying those who can eat a corn dog and 2 minutes later be ready to get on a ride.

I think for as long as I can remember I’ve had some sort of motion sickness. I like to tell myself I don’t but then I have flashbacks of being in 3rd grade and puking on myself on one of those dropping rides. Or maybe the time I semi fainted on a Ferris wheel when I was around 5 years old. But I continue to persevere. I try to test my gut and luck and do things (to an extent of course). For the longest time I thought it was only like roller coaster related but when I was in 11th grade me and my family took a trip to Boston and decided to go whale watching on this huge ship. I didn’t think much into it and went along for the ride. The ship was pretty spacious, and I felt fine at first but as soon as they sped up I was literally on the ground. I made myself lay down and tried sleeping. SO EMBARRASSING.

But if you know me, you’d know I like trying new things out. This summer I went down to Ocean City and on the last day of the trip I was gifted a ride to go parasailing. For starters I was wishy washy this time. I had been out swimming  on the beach for the past 3 days and would see those tiny boats going deep in the ocean to set people on their parasails. I mean, it looked really cool so I wasn’t extremely opposed to the idea. But deep deep down in my mind I was like “girl your stomach.” And girl your stomach was right…..

I went, signed my life away on a waiver,  and embarked on this new adventure that seemed fun.

I got on the boat and that’s when I knew, I had not made the wisest choice. It was like a regular size boat, not big at all, with around 10 people on it. We started our voyage on the bay side towards the ocean. BOY OH BOY, when I tell you that the worst feeling ever is crossing bay water to ocean water. It’s like day and night. Two complete opposite things, and of course the ocean is superior and angrier.  I started to feel SICK!!! But of course I didn’t say anything HAHAHAHA, I was trying to take it like a champ. But thankfully I was the first to get to go parasailing. The walk from my seat to getting all the equipment on felt like a harsh task by its self. The sea was rocking me and I was trying to gather myself. 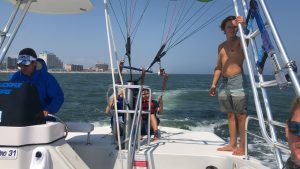 Don’t get me wrong, the view from the top was mesmerizing. On one side all I seen was the bright baby blue sky and on the other side  I seen tiny people on the beach and not so tall buildings from my view. We went up 800 ft! I felt okay being up there. It feels like you’re on a really high swing. You’re not really sitting on anything, so it’s just like the hardness they have you put on is  holding your weight. I don’t know if you’ve ever experienced those cold sweats but at the same time your body feels warm, but that’s what I felt up there. I was up in the air for maybe 5 minutes and it definitely felt wayyyy longer than 5 minutes.

By the time they had brought me down and were taking the hardness off my body, I had one thing on my mind “ YOU NEED TO LAY DOWN”. I hurried back to my seat and hoped the people sitting next to me were up next, and thankfully they were. I laid down on the seat and did not care what anyone thought because I was feeling sick. I carelessly forgot to bring water and OH HOW I YEARN for cold water. Or maybe just some ice cubes to chew on. 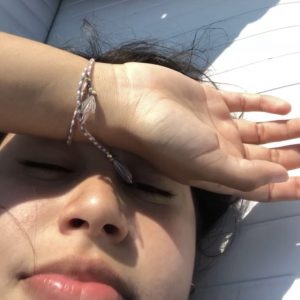 The worst part was probably just waiting for everyone to go up on the parasail. The driver would try to drive to different spots and when he stopped the rocking was just so persistent. I enjoyed moments where we’d move and the water that would crash on the boat would hit me. It felt so cool and refreshing from the beating sun.

Finally, everyone had taken there turn parasailing and we went back. I was grateful for the gift but I was feeling woozy. As soon as I got back on land I sped walked to the car and was so happy to be sitting down in the cold AC.

Moral of the story, if you “think” you have motion sickness (but don’t actually want to come to realization that you do, like me) I would maybe put more thought into going parasailing. Would I do it again? Yes. So ironic, but I would. Imagine parasailing somewhere like  Hawaii or Mexico? No doubt in my mind I would do it again. Would I change things? Obviously yes, bring cold water to sip on. Maybe talk to my doctor about potentially having motion sickness to get medicine. But will I? Umm who knows, I’d still like to say I’m in denial of being prone to motion sickness. Don’t let my wimpy stomach stop you from ever experiencing parasailing. I don’t even let it. Oh, and to the strangers that kindly scooted over to give me room to lay down on the seat, I am so thankful! The trip could’ve plummeted for me otherwise… 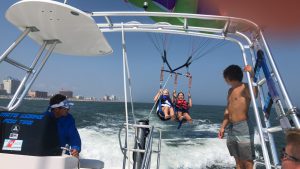 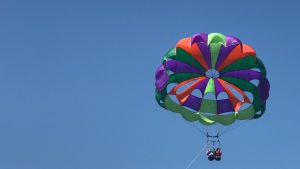 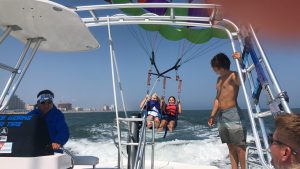