Mina Guli started one of the most ambitious virtual social movements targeting the environment and climate change to date. The current edition of her “activations,” is #Sweat4Soap, which targets the mobilization of 1 million bars of soap that will be donated to refugees in Bangladesh. The campaign or “activations” as she calls them, will involve asking people in various parts of the world to run.  As they complete each kilometer one bar of soap will be donated to her campaign.

Mina Guli has proven to be an effective mobilizer after getting people from over 100 countries throughout the world to take part in a cause that she is passionate about- environmental conservation. With such a feat to her name, just who exactly is Mina Guli? 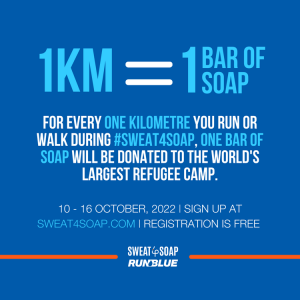 According to her website, Guli is an Australian environmental activist who refers to herself as a “Water Warrior.” Growing up with an apathy to sports, Guli’s life changed when a swimming pool prank during her campus years left her with a hurt back and advice from the doctors that she could never run. “With my lifelong antipathy towards sports, the news should have been good news,” Guli said on her website. “However, the restriction made me take it as an opportunity to redefine my limits.”

Guli started swimming, began biking and eventually started running once again. The motivation behind her effort was the need to prove to herself that she could defy the odds. While working as an investment banker, Guli got the opportunity to work on climate friendly projects that got her nominated to join the World Economic Forum’s community of Young Global Leaders (YGL). This, she says on her website, was her steppingstone into becoming a person who was committed to changing the world. “The Young Global Leaders community introduced me to the shocking problem of ‘invisible water’- the large amounts of water required to facilitate everyday life such as making food and clothing even though no such amounts of water are available.”

In March 2012, Guli launched “Thirst,” a non-profit organization dedicated to raising awareness and finding a solution to the global water crisis. As she continued growing “Thirst,” Young Global Leaders issued her a challenge to create a stunt that would effectively hold the world’s attention regarding the water crisis. This led her to start the ultra-running campaigns.

In 2016, Guli ran 40 marathons across seven deserts within seven continents in seven weeks. "Fortune's 50" named her one of the great 50 leaders in the world alongside iconic names such as The Pope and Jeff Bezos. In an article in "Fortune Magazine," Editor, Matthew Heimer, wrote in reference to Guli, “I have never seen a better example of go big or go home than a 45-year old choosing to run thousands of kilometers for the world to be reminded of something we should already know.”

The response she received from this activity spurred her on, prompting her to launch new marathon events that could be supported by other environmental enthusiasts all across the world. One year later, she launched the 6 river run where she ran a marathon for 40 days along six rivers across the world as a way to support SDG 6 on the provision of clean water for all. Her route included running across The Amazon in South America, Yangtze in Asia, Murray Darling in Australia and The Nile in Africa.

Her other "activations" include The World River Run that encourages individuals from all over the world to run or walk for a given distance for the purpose of raising awareness on the need to conserve our rivers.

Currently, the ongoing "Sweat4Soap activation" is in its second phase during which individuals all around the world are encouraged to run or walk between the 10th and 16th of October and for every kilometer clocked, Eco Bank (a partner of Thirst Foundation) would donate 1 bar of soap to a deserving individual to support water and sanitation needs. Participants from over 100 countries have signed up, most of them without ever meeting Guli. The target institution that is expected to benefit from the soap donations this year is the world’s largest refugee camp in Bangladesh as a reminder that even in the worst of situations, sanitation, is equally significant.

When asked what motivated him to join Guli’s campaign, Robert Keya, the country representative for Kenya in "Sweat 4Soap" affirmed that Guli’s passion for water conservation was infectious. “I have never met her, and will most likely never... But the opportunity to do something from wherever I am that could create increased awareness on matters regarding the environment is one I cannot pass up, and one I am grateful to her for.”

A similar view is raised by Brent Hidgins, a business major at the Community College of Baltimore County. “I learned of the campaign through social media and instantly loved it since I (would) be able to make an impact without necessarily having to incur financial costs,” he says while displaying his registration bib for the run.

Guli recruits country representatives within all the countries that agree to participate within the runs. This helps her to mobilize individuals from all regions of the world to help in raising awareness on the importance of conserving water.

"Sweat4Soap" is a part of Guli’s current campaign- The Run Blue Campaign. The Run Blue Campaign aims to encourage companies to take meaningful steps regarding water towards the lead up to the first global United Nations water conference that will be held on World Water Day in March 2023 in New York. Guli is committed to completing 200 marathons in the lead up to the conference as she calls on 200 companies- one for every marathon she runs- to turn their company blue. Companies that join the movement are taken through the six by six framework that helps them to evaluate their water usage while creating newer and sustainable ways of using the resource.

When asked about the significance of her runs and activism on her website, Guli reflectively said, “Who is anyone else to set a limit on me other than myself? I am the one with the power to say what I can and cannot do.”

Guli further demonstrates how far an attitude change can broaden an individual’s horizons. Behind Guli’s tremendous runs lies a passion for water, a resource she hopes we can all join to conserve by doing the little we can do within our own capacities such as signing up for Sweat4soap here: sweat4soap.com

You can also learn more about Mina Guli at: https://www.minaguli.com/