Communication and Media Week at CCBC Focuses on Film Production

On Tuesday, March 26, 2019, Vonnya Pettigrew, CEO and Founder of Root Branch Productions & Film Academy, visited CCBC as part of its Media Week. As the head of her own award-winning media production firm and learning academy for youth, Ms. Pettigrew has over 20 years of experience as a writer, filmmaker, director, and casting agent to share with her audience of students at CCBC.

Ms. Pettigrew began her presentation with background of her company, Root Branch Productions, which is now entering 13 years of operation and is both certified as a women and minority owned business. 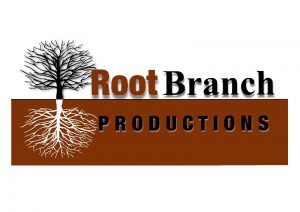 According to a New York Times report of a five-year study at UCLA on the diversity in the creation of films, there has been only slight increases in minority film directors and female film writers. When asked what it is like to be a black woman in a film industry where diversity and gender equality must continue to make strides, Ms. Pettigrew stated she tries to stay true to herself while being creative and encouraged the audience to do the same.

Although, she doesn't ignore the impact her established resume had on her successes. Ms. Pettigrew interned at the White House and knows all too well the weight that holds when applying for new positions. She encourages the audience to, “always think about where you’re placing yourself for internships and experiences as it will help advance you.”

The organization teaches certain college level aspects of film production to disadvantaged kids in elementary and middle school, with a primary focus on the documentary genre. This gives kids of that age-range a place to voice their issues with their school and community, which she describes as “Youth Voice.”

Root Branch focuses on the storytelling and content when helping students.

“I focus so much on the writing, it’s not always about the visuals, the narrative is important to me because I want you to be able learn how to use your words to be able to articulate how you’re feeling,” said Ms. Pettigrew in a short interview after her presentation. “I don’t want them to feel the need to ever have to resort to using profanity…use your words, really tell me how you feel, and that impresses me.” 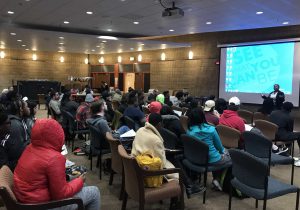 Midway through Ms. Pettigrew’s presentation, she shared with the audience one of the films produced with the assistance of 4th graders of Lockerman Bundy Elementary School in West Baltimore.  It’s part of the Bright Starts project funded by the Baltimore Office of Promotions and the Arts.

The film, Youth Truth, focused on the same 4th graders that helped create it, where they speak of their personal struggles caused by their school and community. It was both impactful to the audience and the Baltimore community. According to Ms. Pettigrew “the kids felt empowered” and because they were given a voice, their school now has as grief counseling program funded by a non-profit organization to aid students.

After the video was posted on the Root Branch Instagram page; Ms. Pettigrew said the Baltimore Police Department contacted her for permission to screen the film at a youth summit to let students know their voice is being heard.

The students ended up winning 30 choice certifications for the Audience Choice Awards, where they weren’t initially nominated.

A CCBC student gave their opinion after seeing it for the first time.

“What I felt...they felt empowered without being interrupted. And what this film does is let them know that they aren’t going to be interrupted this time,” Student Nobi Gray said. “Where at in their own environment, in their own communities, they’re ignored and that’s [what makes this] empowering.”

Since their first year at Lockerman Bundy Elementary School, Root Branch was hired to come back each year to do programs with the kids. According to Ms. Pettigrew, in the second year there, Root Branch helped the students create a song along with a music video in preparation for the “I Ready Test.”

The song went viral and included many of the same kids from “Youth Truth.”

“That song was so impactful and meaningful that we shared it with ‘I Ready Test’ distributors and they loved it and used the song to help other test-takers get ready,” said Ms. Pettigrew. 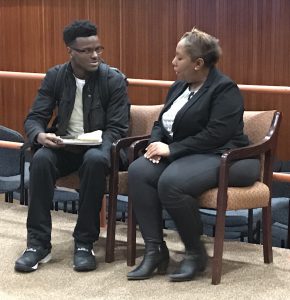 Looking to the future, Ms. Pettigrew hopes she and Root Branch are to make the Film Academy into a “physical space.”She wants the program to be taken by students to help give them credits for college.

Ms. Pettigrew doesn’t know where she wants her school to be established. Possible locations include Baltimore or her hometown of Philadelphia, and she even hasn’t ruled out a strictly online option.

Currently, Ms. Pettigrew has teamed up with CCBC to offer two summer film camps, starting after the spring semester, at the Essex and Owings Mills Campuses for any interested students.