Heading into the 2020 NFL season, many Ravens fans thought there was a legitimate chance the team could improve their 14-2 record from last year and maybe even go 16-0.

The Ravens have definitely not met those expectations. After starting off the season with two straight wins, The Ravens fell to the Kansas City Chiefs in what was a disappointing game for football fans as a whole. After that, the Ravens went on a three-game win streak before falling to the Pittsburgh Steelers in Baltimore. At the time of publication, The Ravens most recently beat The Colts 24-10 bringing their record to 6-2.

Most fans would look at The Ravens season so far and would call it a disappointment. However, what many forget to realize, in last year’s historic season for the Ravens, is that it took them until about mid-way through the year to start playing their best football. 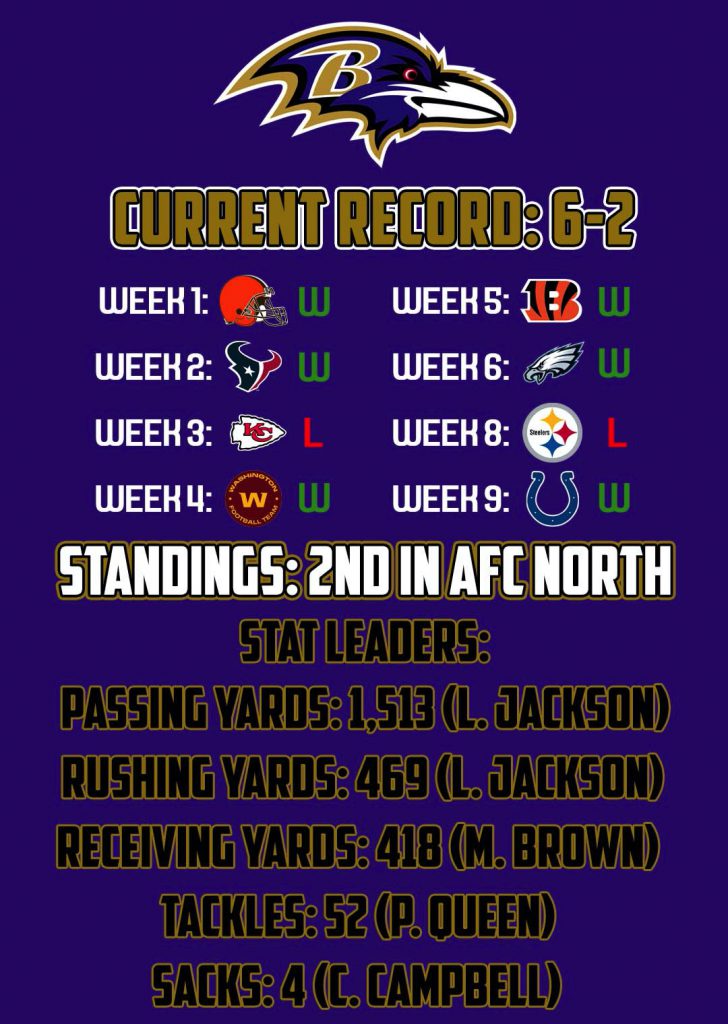 “I’m not quite sure why everybody has been talking down on him,” longtime Ravens fan David Hale said. “He has had success this season and people need to give him the respect that he’s earned.”

Something we may see is The Ravens starting to get Marquise “Hollywood” Brown more involved. Following the game against The Pittsburgh Steelers, Brown took to social media questioning why he wasn’t being used as much. He has since deleted the post.

On the other side of the ball, The Ravens defense has been dominant throughout most of the year. It also helps that general manager Eric Decosta has really strengthened the defensive line with trades. In the offseason, The Ravens traded a fifth-round pick to the Jacksonville Jaguars to acquire Calais Campbell. Then one week before the trade deadline, The Ravens traded a third-round pick and a fifth-round pick for Yannick Ngakoue. Campbell is known to be a dynamic run-stopper and Ngakoue is known to be a big-time sacks leader. This appears to be The Ravens front office knowing what they need to do to win a championship.

This season, according to Sportsnaut, The Ravens defense is ranked fourth throughout the entire NFL. Although it will be tough, The Ravens could get up to the number one spot by the end of the season. The defense is young, and each week has gotten better. When acquiring all of the players they have since last season, the thought was to be better when the playoffs come around. Right now, it looks like that will be the case.

“I definitely think that the defense is there and only getting better,” Ravens season ticket holder Dallas Evans said. “My worry is what the offense is doing. Based off last year, we (Ravens fans) hold the team to a higher standard. Everybody knows what they’re capable of doing.”

The Ravens will play The Steelers again this year on Thanksgiving night at 8:20 pm in Pittsburgh.

Articles reflect the views of the author and/or those quoted and do not necessarily represent the views of CCBC or The CCBC Connection.

How are Small Businesses Surviving the Pandemic?