*Articles reflect the views of the author and or those quoted and do not necessarily represent the views of CCBC or the CCBC Connection.

A recent opinion piece in the CCBC Connection (Student Loan Forgiveness & Cancellation) advocated for Student loan cancellation and/or forgiveness with benefits accruing to the economy, individuals with lower income and affected students.  The author is advocating a position staked out by liberals within the Democratic Party.  However, there are significant deficiencies with this proposal and much has been written expressing concerns.

Articles in prominent publications have addressed the issue in a means using sound objective criteria rather than the subjective concerns that usually accompany arguments for eliminating school loan debt.  Forbes, The Washington Post, The Wall Street Journal and the Baltimore Sun have all published commentary leaning against massive debt forgiveness.

On the surface, cancellation of large debts sounds attractive, but there is no free lunch.  Jack Friedman, in the February 24, 2021 edition of Forbes, gave five reasons not to cancel student loans.  I’ll mention three.  First, Cancelling Student Loans is Poorly Targeted.  Some contend that wide-scale forgiveness of loans will benefit wealthy borrowers over needier ones.    Second, Cancelling Student Loans Forgets Everyone Who Didn’t Attend College.  Only a small portion of the American population is responsible for $1.7 trillion in student loans.  If most of our people owe no student debt, is it fair to cancel student loans for one group of people, and not provide financial relief to most of the population who have different financial struggles?  Third, Cancelling Student Loans Is Unfair to Borrowers Who Paid Off Student Loans.  Cancellation of loans is of no benefit to those who recently finished or are close to finishing payoff of their loans.  Since many of them had to endure financial struggles, if loans are cancelled for some borrowers, shouldn’t there be some level of compensation for these people as well?

Writing in the Washington Post, Allan Sloan suggests alternative approaches to the student debt problem.  For instance, we can expand the Public Service Loan Forgiveness program and promote teaching in remote rural areas or practice medicine there to get some student debt relieved.  This is a win-win, benefitting both people who ordinarily suffer from lack of support and the student borrowers.

I was fortunate to have attended a tuition free college, City College of New York, now part of the City University of New York (CUNY).  Those many years ago, New York’s largesse through the provision of tuition free higher education combined with numerous other municipal giveaways contributed greatly to the City’s disastrous financial collapse of 1975.  The City was forced to  close hospitals, health clinics and drug clinics.  Tens of thousands of municipal employees were laid off, including teachers, policemen and firemen.  Tuition was imposed at CUNY.  All these cutbacks were the result of extravagant government generosity.

About ten years ago, several countries in southern Europe, following a period of large national debt accumulation, had difficulty paying or refinancing their debt.  Greece, Italy, Spain and Portugal were forced into austerity plans.  Austerity plans may include increasing taxes and lowering government spending.  Painful measures such as wage and pension reductions were imposed on the populace.  The agony of austerity was borne by those who could least afford it, but the bill for overspending had to be paid.

Not everyone attends college.  Why should the taxes of the lesser educated members of the public be used to pay for the debts of a relative few who end up earning the most money?  Adding additional trillions to our already huge federal debt of twenty-eight trillion dollars ($28,000,000,000) is fiscally irresponsible.  Europe and New York City had to pay the price of overspending and at some future point, we will too. 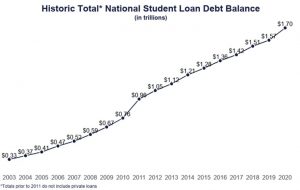