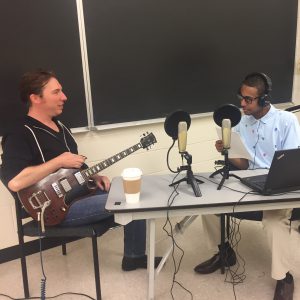 Mass Communication student and New Media Collective (NMC) member, Julian Johnson, recorded the club's first podcast series this semester (Spring 2017).  His podcast will focus on "all things rock".  For his first 4 part series, Julian discussed 1970's Heavy Metal  with Frankie G,  Baltimore Studio Musician and Teacher.  Click on the links below to listen (the link will take you to SoundCloud).

Part 2 1970's Metal:  Find out which is better according to Frankie G and Julian, British or American 70's Metal and hear some recent news regarding 70's Metal musicians. (12:20)

Let us know what you learned or questions you have about Metal in the Comments below.  Join Julian in the Fall 2017 semester as he delves into 80's Metal!

Special thanks to Frankie G for producing the audio and writing the theme music for Julian's Rockin' Radio Podcast!