On Thursday, March 23rd at The CCBC Catonsville Center for the Arts, various members of the college community came together to watch a modern-day production of Shakespeare's Classic Romeo & Juliet. However, unlike most modern-day productions of this historic play, this one was produced featuring a combination of deaf and hearing actors.

This production was a joint effort between CCBC’s Theatre and Interpreter Preparation Programs.

As the "curtain" rose the atmosphere in the theatre changed dramatically. Starting with a musical number the production opened with the cast on stage dancing and setting up for the opening scene. As the play progressed the audience could see the hard work and determination of the cast and crew as they simultaneously worked and signed together.

During the play, the technical crew had subtitles above the stage for the audience that could not understand the dialogue in sign language between two actors. However, for the audience who were deaf, the cast had bilingual actors and actors who learned some ASL interpreting for the actors when they signed. It was a truly remarkable coordination between both sets of actors to make the play come to life. The lighting designer, Moe Conn, also showcased the intense scenes between actors by changing the lighting to blood red (for a death), extremely bright (for day), and focused light (for a romantic scene). 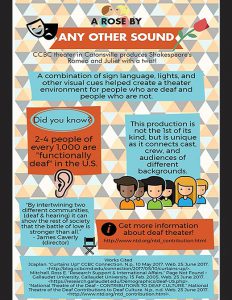 Approaching the end of the play when Juliet is found "dead" you could see the true beauty in the atmosphere in the theatre. The expressions on the actors’ faces when setting her body to rest had the audience on the edge of their seats.

When Romeo entered the crypt after being chased by security the sense of dread and sadness fell upon the stage as he sees his love dead. After killing himself to be with her, Juliet soon wakes up from her sleep seeing her beloved dead beside her, eventually taking a knife ending it all in a bloody shade of red.

Then, more actors entered the stage seeing both the main characters deceased. At this point the Capulets and Montagues joined hands together weeping for their lost children. Other characters on stage dropped to their knees in sadness and as the lights turned off, the crowd erupted in applause for a job well done.

In an interview with Theatre Professor Cohen Ambrose, he spoke about his experience working with his fellow actors. “This was a unique experience. We had a variety of hearing actors, 4 deaf actors, and bilingual actors, our director James Caverly is also deaf. A team of interpreters were also at every meeting and performance to help with the production.”

Over the course of the production, hearing students learned American Sign Language to communicate with their fellow cast mates. Students also learned how to sign song lyrics during the musical numbers.

Prof. Ambrose continued to express that the entire production of the play was a learning experience for not only himself but the community around him.

“It was a unique challenge for academic theater,” Ambrose said. “Working with these students was a really fun and eye opening experience. I myself learned a lot about communication and collaboration with our crew. Producing Romeo and Juliet this way was a very exciting challenge creating something that was unique. During the production we all learned to be patient and flexible. The production taught me a lot about hearing privilege.”

In a Question and Answer session held with the cast and crew at the end of the play Director James Caverly, revealed why performing Romeo & Juliet is still important and how it still relates to the modern-day struggle in society in 2017.

Caverly stated, “Today in our society there is a lot of division in the United States. The 45th President (Donald Trump) has a lot of hate festering and growing amongst the American people. The reason why we chose to produce Romeo & Juliet is because it is a story about love still existing in the world. We can find common ground in love instead of hating one another. By intertwining two different communities, (deaf & hearing) it can show the rest of society that the battle of love is stronger than all.”

The response from the CCBC Community to this production has been phenomenal across the board. There has been overall positive feedback from all who attended.

“The Communication Arts Department is very proud to have partnered with the Theatre Department for this outstanding production of Romeo and Juliet,” said R. Michael Walsh III Chair of the Communication Arts Department. “We commend the cast and crew for their incredible dedication to ensuring the play was a big success.  The positive response to the show was massive, and we look forward to more artistic collaborations that showcase diverse actors, engaging themes, and unique voices.”

As the curtain sets on this year’s unique production of Romeo & Juliet it seems to have created a new beginning for the future of CCBC Theatre.