Last week I talked about mindfulness and how important it is to be aware of how you are feeling and to take a break. Well I decided to take my own advice because I’ve been going crazy locked up in my house for the past couple of months. So this past Wednesday my family and I decided to take a little day-trip to Virginia. Our destination was Luray Caverns.

Luray Caverns is the largest cave in eastern America. It was discovered in 1878 but has been around for 4 million centuries. Some cool features include ‘The Great Stalacpipe Organ’ which is the largest musical instrument in the world. When it is played you can hear the sound bouncing around the caverns. There are also perfectly clear mirrored pools that show even more of the cavern.

They also have wishing wells – correct me if I’m wrong but isn’t the belief with wishing wells that your wish will only come true if you don’t say it out loud. Once you leave the caverns, there is plenty more to do like the garden maze. 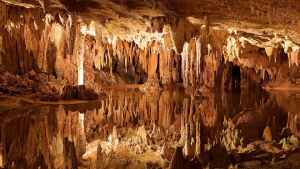 The Luray Caverns are a beautiful natural landmark that I would recommend to anyone. It was even worth the almost 3 hour drive. 10 out of 10 would recommend.

See you next week.

We’re excited and proud at CCBC to be a finalist