The making of a “promise” 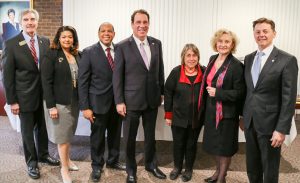 Some of us returned from spring break to the delightful task of hosting a visit from Dr. Martha Kanter, Director of the National College Promise Campaign.  After our County Executive announced his proposal to fund the Baltimore County College Promise Program, Dr. Kanter proposed a visit to CCBC to give our Promise initiative national visibility as part of the celebration of April as Community College Month.

The visit included a tour of laboratory/classroom facilities of two of the premier academic programs at CCBC Essex.  Dr. Karen Wons, project director for CCBC’s  Nursing Associate to Bachelor’s program, introduced the group to one of our impressive Nursing simulation laboratories; CCBC Networking/Security Department Chair Noell Damron showcased the amazing capacity of the Cybersecurity Center.  The tours were followed by a roundtable discussion on College Promise issues and advantages conducted by Dr. Kanter.

This was another proud moment for CCBC. Chosen as a college to be featured by the National College Promise Campaign is a singular honor.  The campaign has included CCBC in a one-minute video just released, to promote community colleges: “This is College” video.  They have also published a Baltimore County College Promise blog from County Executive Kamenetz and me on their College Promise campaign site at Forbes.com.

I continue to maintain that the Baltimore County Promise Program is one of the most important of CCBC’s enrollment/economic stabilization initiatives on the horizon.  More than that, however, this initiative, if funded by the Council, will be one of the most significant investments that the County can make in the college, the people we serve, and the communities in which they live.

Another good day for CCBC!