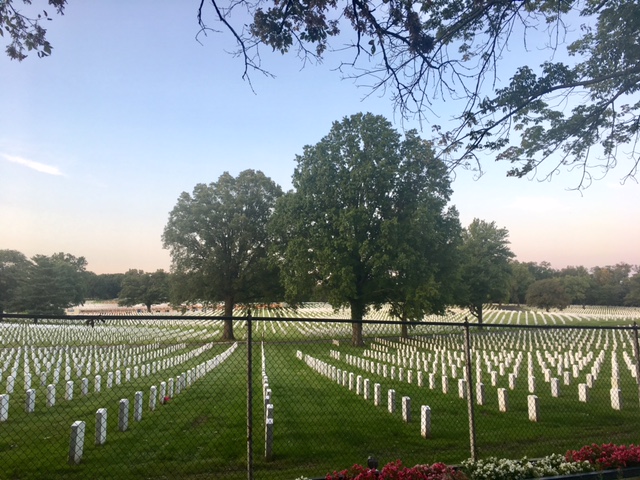 I like to take walks to have some solitude and get in some exercise on days otherwise spent at my desk. Lucky for me there’s the start of a mile long path right behind my house. It takes me through the woods, and looks especially beautiful around this time of year when the leaves are turning fiery.  Near the end of the path, I pass the Baltimore National Cemetery, where thousands of veterans are buried. They are soldiers lined up in death like I imagine they were in life, rows and rows of straight, stark white headstones. I appreciate the graveyard being there because it reminds me of death. Not in a weird fixated way, but just as a reminder that I will also, one day, be buried under cold dirt. Maybe sooner rather than later, who knows. I could, God forbid, get into a car accident hours after writing this post. I’m sure even the veterans buried in the cemetery didn’t expect to die when they did. One of the few gravestones I can read through the cemeteries chain link fence is ‘William James Cuddy’. Born in 1916, Mr. Cuddy died months before his 50th birthday. I’ve never seen any flowers on his grave, and sometimes I wonder if he had any kids before his passing. If maybe I’m the only person who reads his name and thinks about him anymore.

Mr. Cuddy reminds me that once you die, you fade from people’s memories. Maybe not for a long time, maybe you become famous and go down in history, but you still don’t affect the world as you did when you were alive. So what do we do to cherish our lives? Do we really understand how short a human lifespan is if we’re living lives filled with regrets and unhealthy habits? I always try to think about that. “What am I doing today, in this hour, in this second, that will leave a positive effect on the world while I’m it?” I don’t want to be on my death bed with regrets about how I could have done better. I want to pass away knowing that I lived life as kind and fulfilling as I possibly could have. That’s why I really get frustrated when people push away parts of their life, good or bad, saying that they’ll get to it ‘someday’ or it’s a problem for ‘When I’m older’. Who promised you tomorrow? Who declared you would reach old age? Some people think death is a depressing, heavy concept to have constantly weighing on your mind. I personally believe the more open and expressive we are about death, the more we can use it as idea to make positive change in our lives, rather than an uncertain shadowy figure we try not to think about too much.

I know it’s hard for young people to consider a time where they won’t be here anymore, and I understand. We feel invincible, are having too much fun to consider the consequences of our current lifestyle years down the road. That’s okay, I don’t think you need to overhaul your entire life or anything. Just… try to reflect more on what you do, what you’ve been doing. Will you still be happy and satisfied with the decisions you’re making now, for your health and happiness, in the future?

Sorry if this post isn’t as lighthearted as most of my others. I always get a little lost in the sauce after visiting Mr. Cuddy. I hope the too-many-questions I posed today made you think, tho.

maybe i will put flowers on mr. cuddy's grave next timetill death do us part
Leave a comment
688