Speaking at the United States Institute of Peace for AMATE Symposium 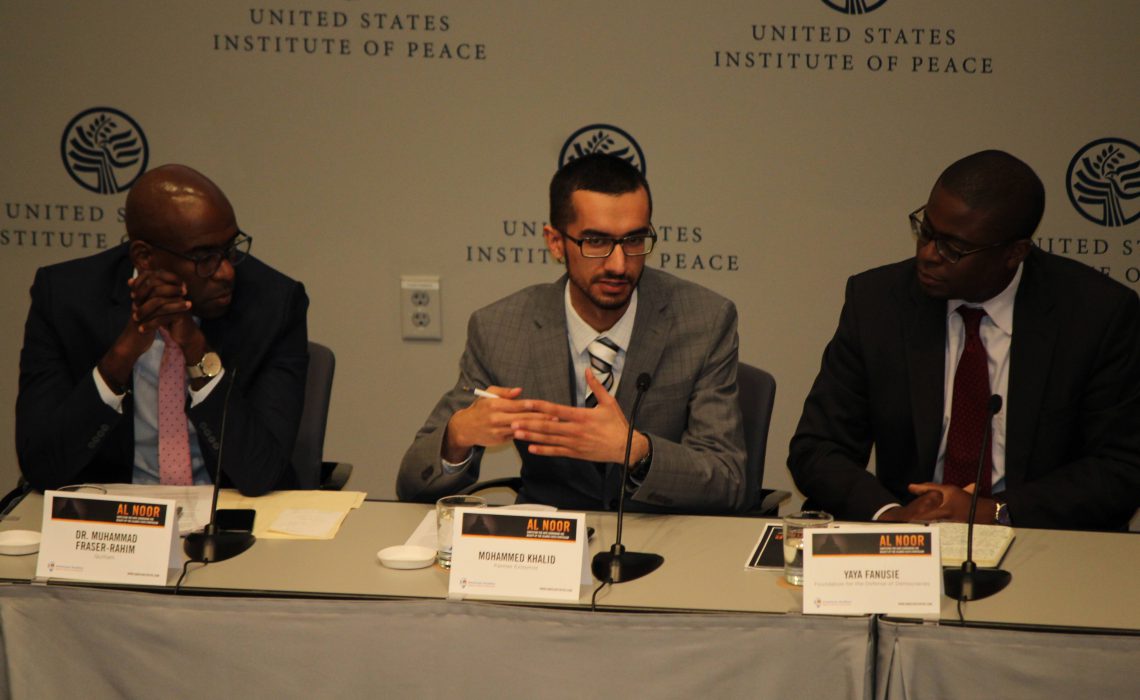 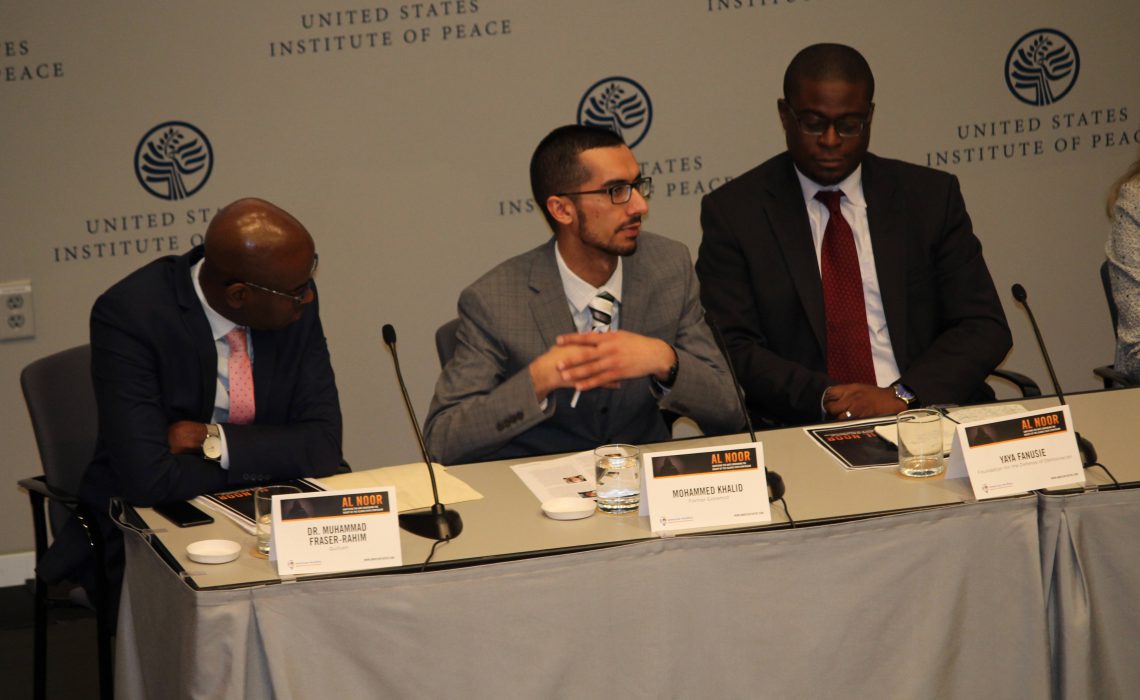 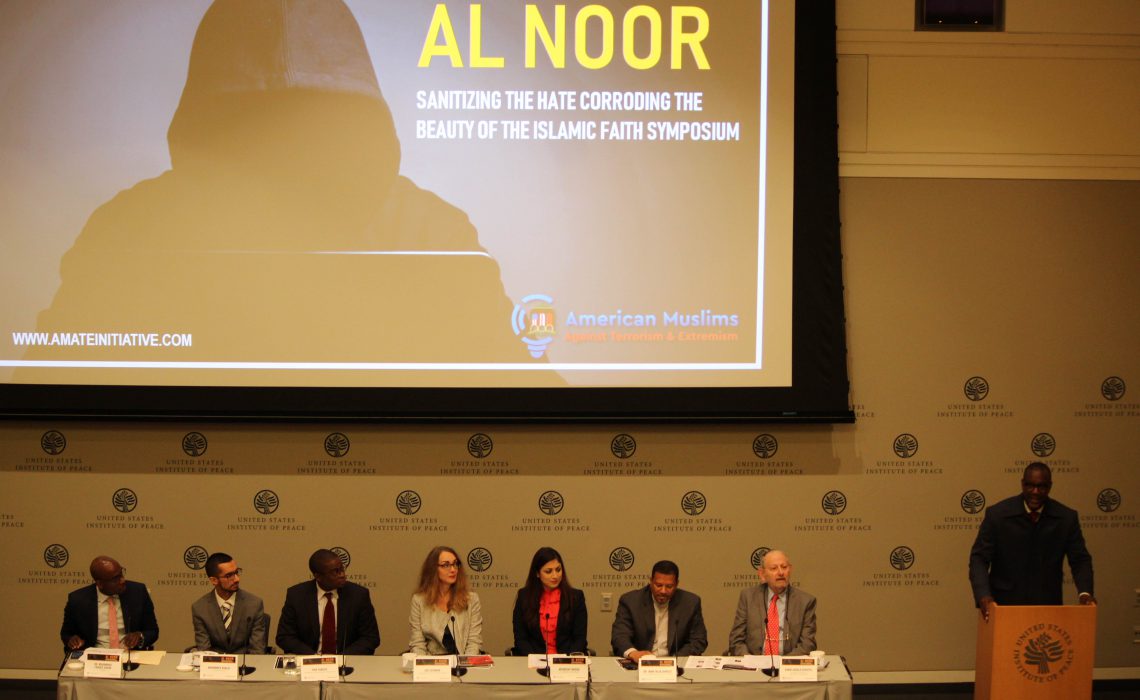 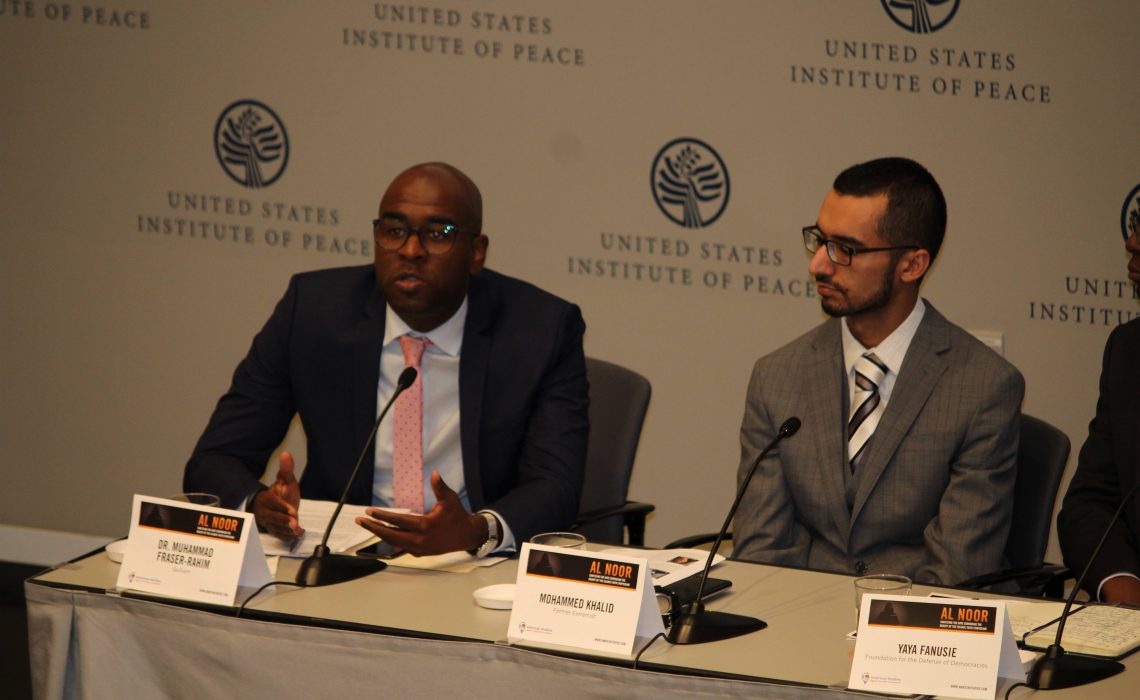 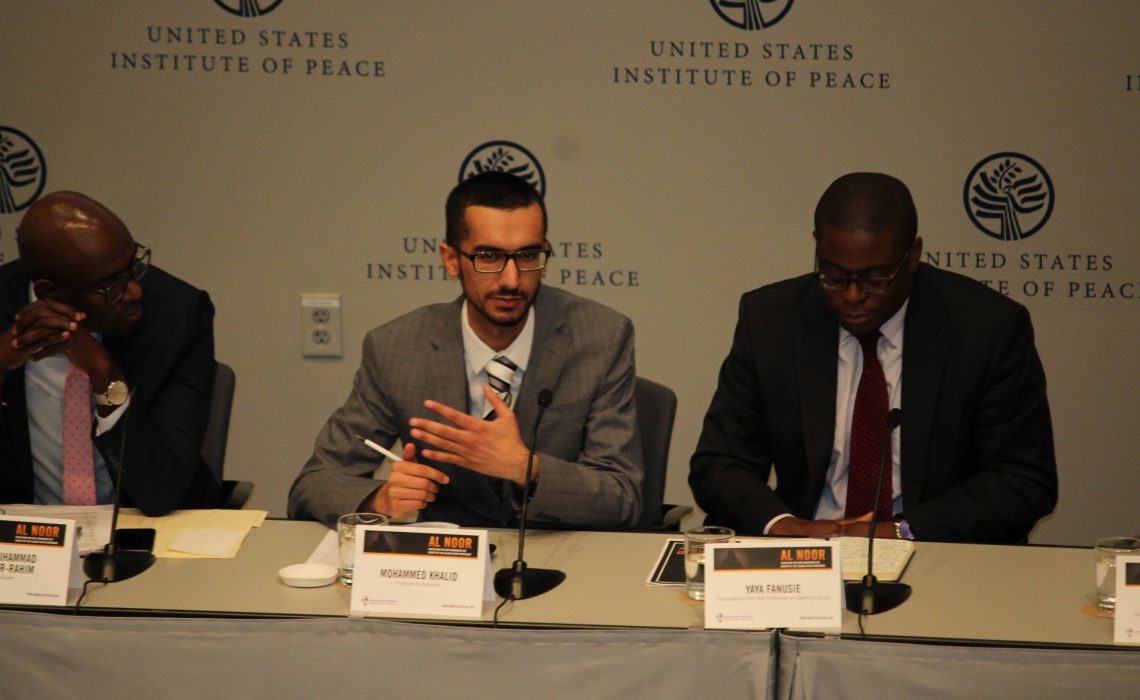 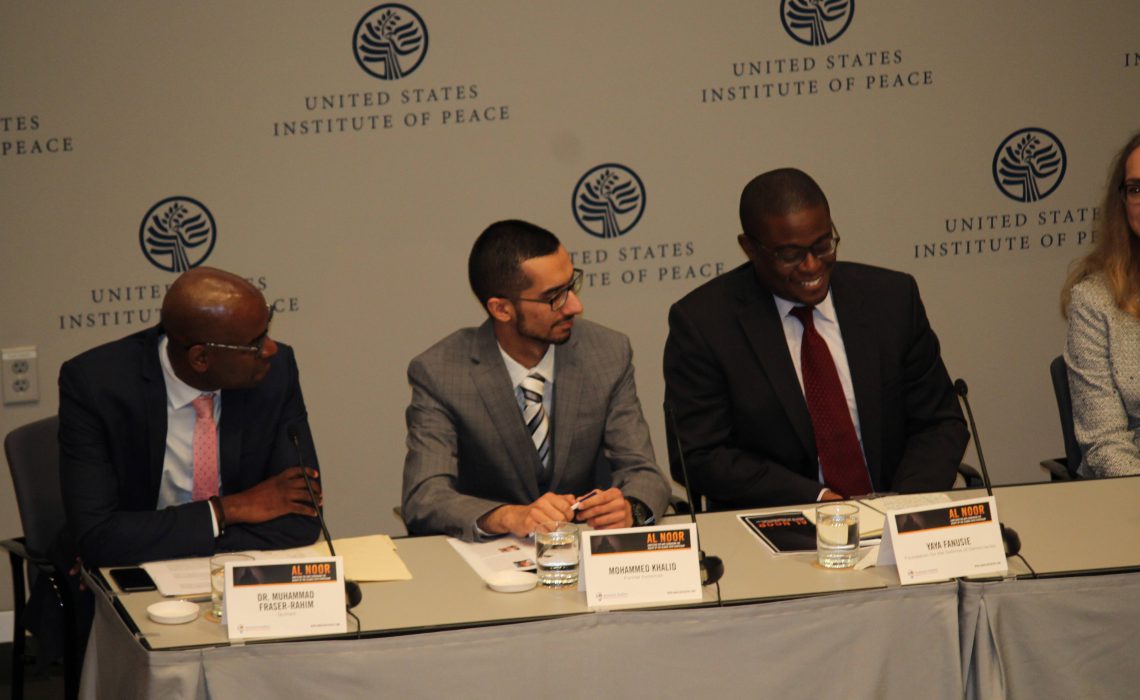 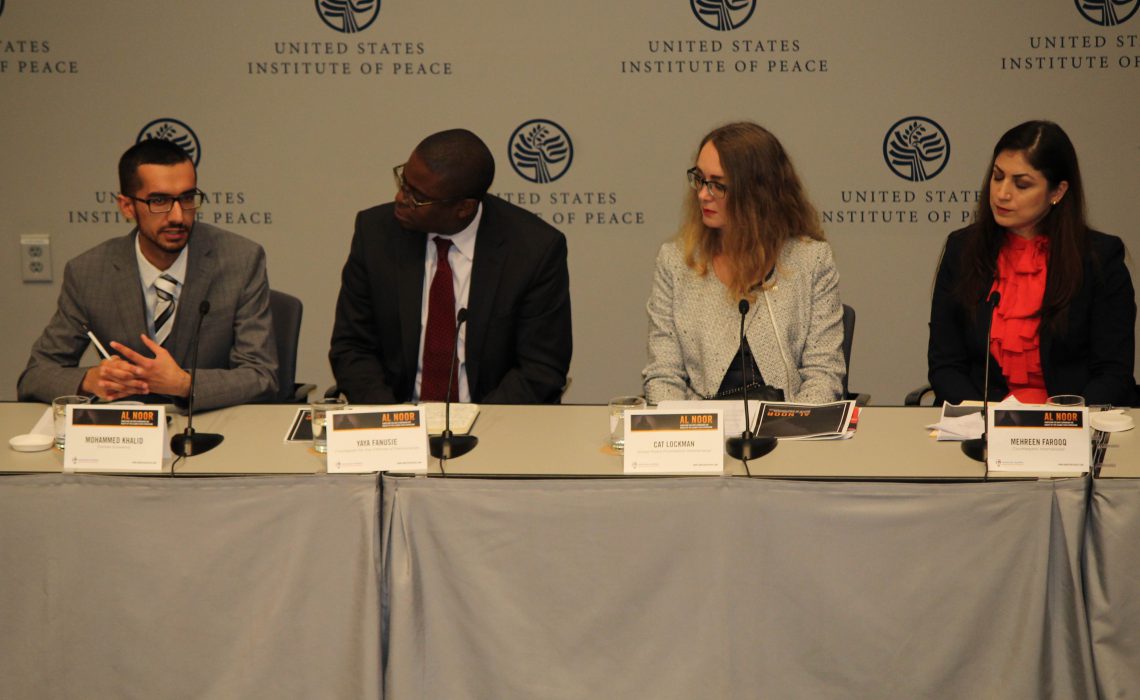 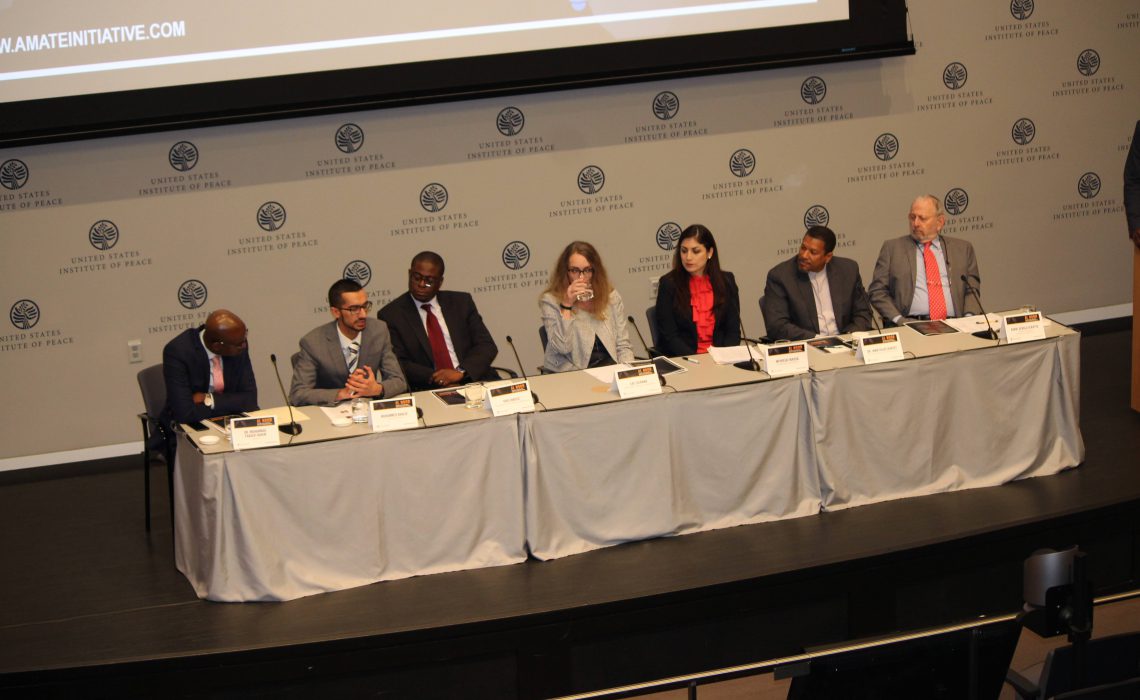 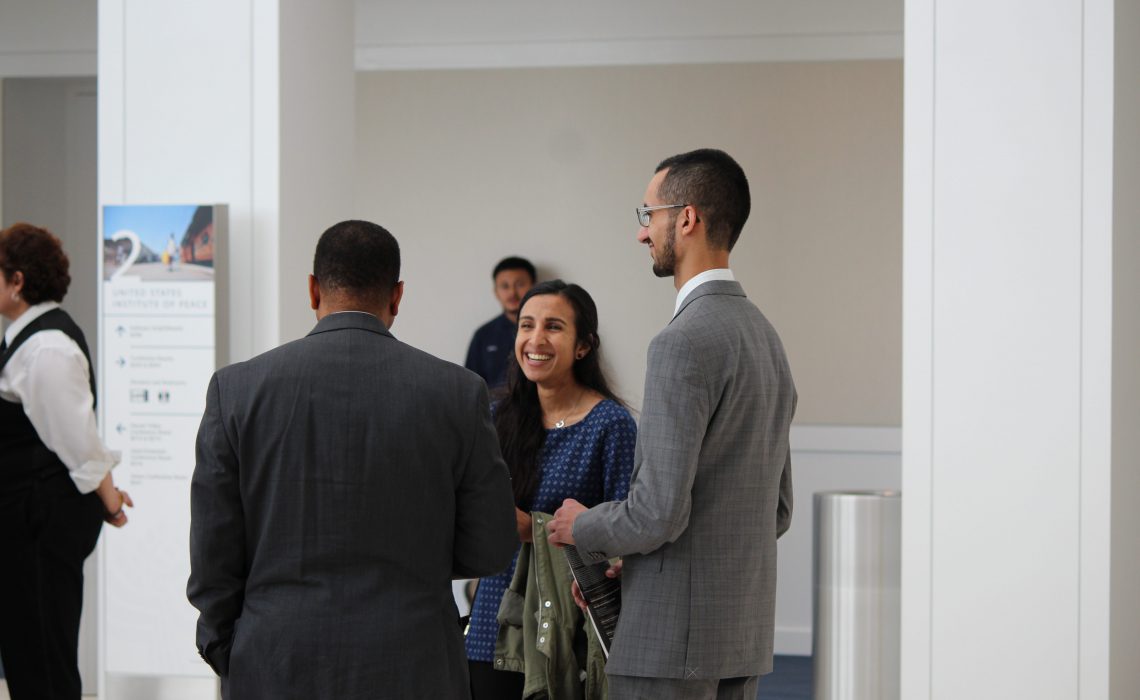 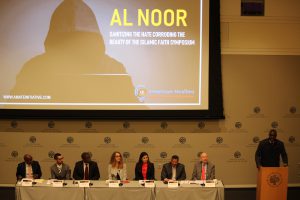 This past Thursday at the United States Institute of Peace, I was invited to speak along with a panel of distinguished guests at the American Muslims Against Terrorism and Extremism (AMATE) symposium, part of a campaign sponsored by the U.S. Department of Homeland Security. Lead by Masjid Muhammad “The Nation’s Mosque,” the AMATE initiative provides authentic counternarratives to violent extremism through an innovative social media campaign with which I have assisted in the past.

Judging from my interactions with the attendees in the audience and personal experience, it is apparent that such initiatives are critical to bolstering efforts against religious radicalism and ideological extremism. 17 years after 9/11, we are asking the same questions about how to best prevent terrorism and cripple the gains of terrorist groups. The AMATE campaign proves that solutions can come from within the Muslim community and that a fruitful partnership between the government and faith-based communities is a strong deterrent in preventing radicalization of the most vulnerable, i.e. children. Yesterday’s al-Qaida has morphed into today’s ISIS, and it is very possible that the defeated ISIS will consolidate back into al-Qaida. In fact, there is proof that al-Qaida is already in resurgence.

Lots of folks may have a problem with a government and public partnership. But it is precisely partnerships such as these that can blunt the effectiveness of terrorist groups that make no distinction between governments or the public. Domestic terrorism remains a threat today as well — I remember recently the FBI director stating to a congressional committee that out of 5,000 terrorism investigations, 1,000 are homegrown terrorism investigations. This means we have a daunting challenge before us. And agree or disagree with the FBI or the government, but a conversation needs to occur at the civil society level or dissuade individuals from the violent extremism path. That is where AMATE seeks to fill the gap.

To be sure, one of the most difficult issues in dealing with religiously-motivated terrorism is the role of religion itself. Some people deny that religion has anything to do with terrorism, while others go to the other extreme to claim that religion has everything to do with it. But what’s even more hurtful is the failure of such important conversations to occur within our religious communities. I am a born Muslim and my life (to say the least) has been beset by challenges of extremism and terrorism. I have paid heavy dues for my wrong beliefs, thoughts, and actions. But, thankfully, I have also emerged out of the worst part of my life to become an undaunted advocate for religious pluralism and open understanding. Tragedies are born, but they are also overcome. That is why I was chosen to speak at the panel. One attendee told me at the end: “Having theoretical talks from experts is fine. But having a practical outlook because of your presence made this an amazing event.”

The symposium featured a very moving video — beginning with the heartbreaking footage of twin towers. Terrorists gloat over that footage as a vindication for the wars leveled against them, conveniently forgetting the atrocities they continue to level against human beings (no matter their religion). But as I sat there just a few feet away from the big projector screen, my heart screamed: “My God, my God. Lives are at stake.” It wasn’t as if I was seeing that footage for the first time; it’s just that my heart sank seeing the sheer, powerful force of hate and the destruction that accompanies it. The real tragedy is the loss of human life, and close to 3,000 human lives were lost that day. The repercussions of that day reverberate to this day. 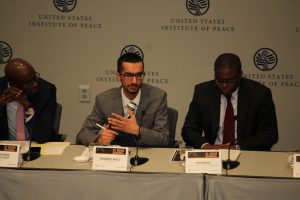 From left: Dr. Muhammad Fraser-Rahim (Quilliam International), me, and Mr. Yaya Fanusie (Foundation for the Defense of Democracies)

I had to hold back tears. I vowed to be strong when it comes to these engagements. Public speaking is something new to me, but I am slowly learning. This was my third public engagement in less than a month. I tend to be a better writer than a speaker, but I have looked forward to speakerships because they give me a valuable opportunity to share my personal story, to tell the world that hope against all odds is possible, and that making amends can be a part of our personal journey towards lasting fulfillment.

Still, I held back tears of sadness and pain. I saw my story flicker on the screen — an interview with AMATE campaign that was filmed last year and finally aired at the symposium. I saw Dr. Muhammad Fraser-Rahim, the executive director of Quilliam International, who I have had the privilege of getting to know for the past 1 1/2 years, discuss how Muslims have made numerous contributions to the American society. I saw Imam Talib Shareef speak about the religious aspects that have been torn apart and appropriated by terrorists, at the expense of the sufferings of others. There was so much buried within, but I kept it inside me. I did not want to relive the trauma that can be a part of such a difficult journey. Nothing, of course, can be compared to a particular form of trauma that terrorism victims and their families go through.

But you know what? Seeing faith leaders, government officials, scholars, and experts from diverse backgrounds, different ethnicities, and unique perspectives in that one room gave me some optimism. The fight is far from over, and terrorism will not simply stop in counting its casualties. But I looked around me and I shared discussions of our inherent humanity, I saw the vigorous defense of our religions, and I bounced off ideas in the networking luncheon. I saw the young and the old debate over the meaning of terrorism, the breeding factors, the political aspects… and I had two separate moments of introspection:

That no power in the world is more stronger than the eyes of God. Those who commit these daily atrocities will have to answer for them. Yes, sometimes people are misguided. But some people also make a rational decision to partake in heinous actions, enjoying the carnage and deliberately forgetting the humanity that connects them to their victims. It is these people who will have to answer, and who won’t have any excuse when the day of judgement comes.

And that no act of mercy is more visible than the hand of God. Those who fight to defend our country, our values, and our beliefs — the members of military, the government officials, the everyday Muslims, the faithful activists — will have their share of rewards when the time comes as well. These people chose to live up to the lofty ideals that makes America so great, and will continue to enrich the fabric of this country.