In celebration of Juneteenth, I started with a poignant statement from President Biden:  “Nations don’t ignore their most painful moments.  They confront them to grow stronger.”

In honoring the recently minted holiday of Juneteenth, that is the sentiment we carried forward during our recognition. We celebrated the end of slavery in the United States in 1865, more than 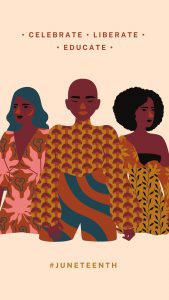 At CCBC, we chose to honor Juneteenth with celebratory programming which members of the CCBC’s President’s Diversity, Equity and Inclusion Advisory Council developed to embrace and acknowledge the power of the day as a significant “marker” in time.  We “marked” the day not only as an important date in African American history, but one that is equally symbolic of the powerful role that race has played in shaping American history  . . . and what we are – and what we are not – as a nation.

Juneteenth must perforce serve as a way to honor those who suffered enslavement and were ultimately freed from bondage. Given that history, for those of us in the community college world, that gives the work we do greater importance. The 1,000 community colleges across this country serve the most vulnerable populations and communities. We must recognize the power of education – of our open door mission – as key to providing the equity of opportunity due to all Americans.  No other sector of higher education can do what we do!

The image of America as a “melting pot” is as powerful today as it was in earlier centuries.   As a nation, we all have much more in common than not, and much more to celebrate together than to disagree upon.