0
The African Savannah Comes To Life At Cockpit In Court 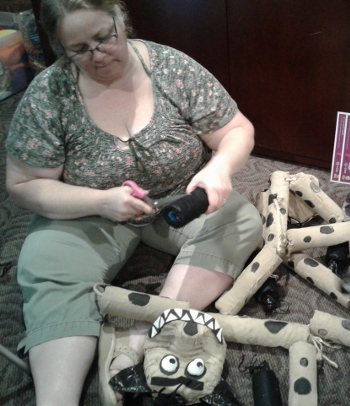 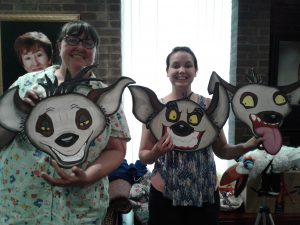 There is ordered chaos in the dressing room for The Lion King Jr. Director Liz Boyer Hunnicutt and the cast of 39 young actors, along with a slew of volunteers, are busy preparing for Friday, July 6, 2018 – opening night.

Make artists Theresa Foggo, Shayna Roberts and Kerry Morrison, are all Moms of aspiring actors in this production. They apply the paint that transforms these young faces. Creative fashionista, Sharon Byrd, is the Costume Coordinator.

Evelyn Acerno who plays Young Simba and has been performing since age 5, is having lots of fun acting with cast member Amy Claudio (Young Nala). And, No! you are not seeing triple. Evelyn is 1/3 of the talented Acerno triplets, Erin Acerno is a Lioness and Nora Acerno is part of the Ensemble.

Ethan Holler is Simba and looks forward to challenging Scar played by Dylan Morrison. He says this shows bravery and courage. Spoiler alert – Simba wins! At just age 15, Ethan has appeared in 26 plays, 3 of which he did simultaneously.

Molly Parker as Zazu, official cub sitter,  likes her dancing parts and trying to control the cubs. She likes to act because she can be different characters but likes being herself the best.

Bella Comotto is cast as Timon a meerkat who, according to Bella, can be funny but a little rude. Acting since age 4, Bella likes the feel of community and says everyone is supportive even when competing for same role. Her favorite part is when Simba falls in love with Nala and Timon is O.K. with letting them be together.

Serenity Holmes plays Rafiki who can make magical things happen. Serenity likes singing the song “He lives in You”. Her acting career began right here at Cockpit in Court with the Wizard of Oz, she was 5 years old. She likes being on stage because she gets to tell the story to different audience every night. She recently portrayed Alice Blake in Up the Down Staircase which was outside her comfort zone, hasn’t fallen in love with a teacher yet!