The generation raised on television’s CSI dramas and sophisticated detective work brings a much more mature awareness of the world of violence and crime than the more simple “shoot-em-up” cop shows of the past.  Recently, 80 high school freshmen and sophomores from four local high schools descended on CCBC Dundalk to grapple with the substantive issues of civics and law.  In an event made possible through a partnership with the Baltimore County Bar Association, local judges, lawyers, faculty and police personnel spent a good part of the day interacting with small groups of students on key issues faced by lawyers and police officers alike. 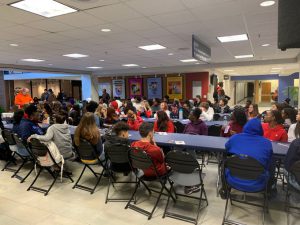 Implicit in the messaging that frames this day is a phrase that Baltimore County’s Judge Burke often adds to these discussions: “The only thing necessary for the triumph of evil is for good men to do nothing.”  As Americans, we know how to engage in peaceful revolution through a voting franchise that places the course of the nation in the hands of millions of free men and women.  Even with the divisiveness that dominates politics in Washington, D.C., Americans fight for what is right with hearts and minds, not with fists or guns, and we do so with an insistence that respects the rights of others.  How blessed we are that in America we can take for granted what others across the world must sometimes die to achieve.

Long ago our Founding Fathers created a Constitution that guaranteed a set of freedoms for every American.  In the darkness of World War II, Franklin Roosevelt created the powerful imagery of the four freedoms which Norman Rockwell turned into a simple yet powerful artistic rendering through the four paintings titled Freedom of Speech, Freedom of Worship, Freedom from Want, and Freedom from Fear.  The message embedded in the Civics and Law Academy is that “freedom” results when the rule of law and the supremacy of human rights serve as primal forces binding a society.  “Our nation has placed itself in the hands, the heads, the hearts—and in the courts—and all those who serve the justice system.”

It is quite a special day when 8-10 Baltimore County lawyers and judges step away from their courtrooms to spend time inspiring young people to understand the role of law and to see beyond the “cops and robbers” of television drama.  What better tutors could these young people have than the practicing judges and lawyers who wrestle with these concepts everyday.  And even if becoming a famous lawyer does not turn out to be a career goal for these teenagers, each of them will have a glimpse into how to become the good men and women we need to foil the triumph of evil!