On January 6, many of us watched in disbelief as the U.S. Capitol was desecrated while an unruly mob of our own citizens attempted a coup to overturn the results of a lawful election. It was a dark day for 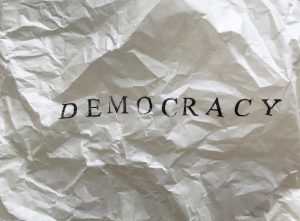 America, no matter your political allegiance. The shocking image of rioters roaming freely through the halls of Congress will leave an indelible mark on the hearts and minds of all of us who love this country and revere the democratic process.

A day set aside for Congress to perform the routine, but important task of certifying electoral votes as prelude to a peaceful transition of power turned into a day of chaos and destruction. As a nation, we were tested, and in the end, we were not found wanting.

This election cycle, long and harrowing, is now over. We can only hope that January 6 was a turning point for a divided America. The events of last week reminded us of both the fragility and the strength of democracy. Shocked, shaken, but determined, perhaps more of us will now be ready to debate our issues through civil “discourse,” rather than civil “discord.”

As president of the Community College of Baltimore County, I want to assure you that the image of America we saw last week is alien to those of us at CCBC. Our college must remain apolitical, of course, but we pledge to keep our campuses safe – both intellectually and physically – for all faculty, staff, and students, no matter their background or beliefs. We want to model a way to have difficult conversations through discussion rather than rancor. Part of our role is to help students understand our nation’s history and its values, but we must also help celebrate the rich diversity of the America – and of the college – we are today.

Last Wednesday was a sobering moment for all of us, a dose of reality that shook us to our core as we realized “Yes, it can happen here!” but … only if we allow it. January 6 we stood our ground; but we came perilously close to an edge. For all of you who depend upon us, we want to replace images of riot with a vision of a 21st century America committed to equity, social justice and economic opportunity for all of us. These values lie at the core of our mission, the one we live every day, and we intend to use them to nurture and support each of you who comes to CCBC as a door to opportunity.